The History of Art Deco

The post war period from 1920 to 1939 brought about lots of changes that would influence both art, music, literature, fashion and architecture. It was known as “Style/Art Moderne”, the term “Art Deco” was not used until the 1960s. Improvements in modern technology and especially social progress in communication allowed room for new growth and information to reach more people globally.  It was the time of innovation that brought electricity, automobiles, telephones and motion pictures.

The International Exhibition of Modern Decorative and Industrial Arts in 1925 was one of the most noticeable events that brought about change.  There were over 400 jewelers displaying their pieces at the time in an area of 500 square meters.  Just like during the Art Nouveau movement, there was even more of a desire to bring about modern techniques in manufacturing and ways of thought for the Deco period that followed.

The optimistic idea of re-inventing “NEW” concepts behind how art was both created and interpreted was important for this movement.  Influences in art came from Cubism, Futurism and Expressionism.  All of which have some form of reaction to the changes in societies shifting in the direction of the old to the new with technological growth and industrialization.  These categories have had one of the largest influences on modern art.  Distortion, exaggeration, repetition, and fantasy can be seen across these forms of art.  You can see the cross references of the concepts in these art forms even in jewelry during the same time. 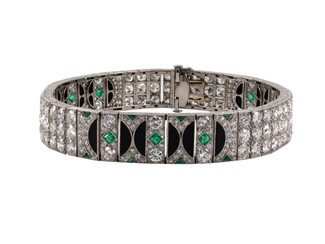 The finest jewelry consisted of patterns of simple, yet elevated, graphic and angular configurations with unexpected combinations of materials.  Bold combinations of color and high contrast set the tone in pieces with geometric shapes and structural lines.

In 1922, the discovery of King Tut’s Tomb sparked a huge following and taste for what was considered Egyptian revival jewelry.  Showing a connection to the past with a modern twist was prevalent.

Design inspiration of Egyptian motifs like scarabs and lotus flowers were some of the most popular looks in Egyptian revival jewelry. The height of the trend was reached in 1929 with the Cairo Exhibition.

Asian motifs were also a large influence of the Art Deco period with fan shapes and the usage of striking and beautiful green jadeite in jewelry design. 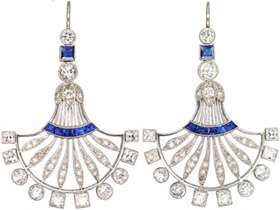 Platinum was the precious metal of choice and offered more design options due to its malleability. The platinum pieces carried weight, and are distinguishable during the Art Deco period due to their density. Jewelry was designed in white gold, which had only recently become available in 1912, and silver for different price points. Milgrain and filigree work were also prominent.

The Jazz Age and time of the flapper girl’s attire were influenced by clothing designers like Coco Chanel.  Women’s clothing became streamlined, practical and less constricting. Hemlines were shortened and dresses became sleeveless.

Stacking bracelets around both wrists and wearing upper arm bangles were popular since the dresses were sleeveless. 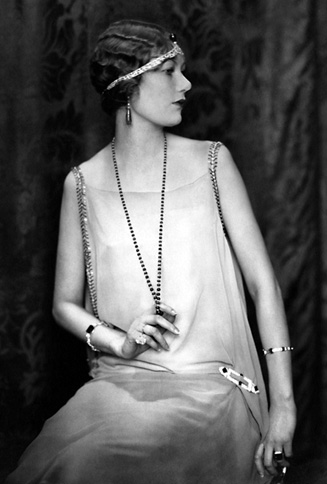 Earrings were an essential accent to the short bob hair styles worn by fashionable ladies of the time, and made the perfect accent for framing the face and jawline.

Earrings were often long, dangly, and tassel-like with multiple strands of diamonds or pearls like the long necklaces that dropped from a geometrical shape on top.  Jewelry, especially earrings served multiple functions and had usually had detachable parts that could be transitioned from day to night. 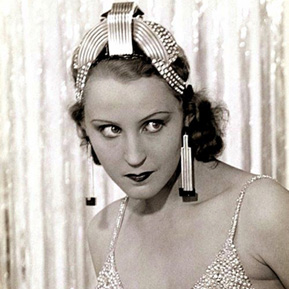 A magnificent era for inspiration in history, the Art Deco period carries a strong influence on jewelry even today.  Designers are adding new twists and modern takes that are Deco-inspired and Estate Art Deco pieces are often most sought out.