True, “new art” jewelry, later known as Art Nouveau was created in France and Belgium between 1895-1910.  The style reflected several concerns in French society.  Women of strength, fighting for their equal rights outside of the home with education and a career.  So much of art nouveau is centered around women.

France had lost in the Franco Prussian war making it a vulnerable time for the nation.  There was a concern that birth rates would drop if women pursued a career, and thus the concern of strength in their future army.  Women at the time were both respected and feared.

There really was a global movement at the end of the 19th century because of scientific and technological advancement that created a new generation of innovators and creatives that questioned old ideals.

Art was originally created for patrons like monarchs, the church, and wealthy merchants.  The idea of blurring the lines between fine arts (painting and sculpture) and applied arts was considered disruptive.

Questioning traditional academia on how art was interpreted and making it more accessible to all people was due in part to the Art Nouveau movement.  The idea of bringing together other artistic disciplines via “total work of art,” or Gesamtkunstwerk was brought about.

Most of the jewelry depicted women with long flowing hair and soft features, but also woven elements of nature never seen in jewelry before. The women depicted were at times half woman and half creature creating mystical, deadly, and seductive looks, like Medusa and Salome. 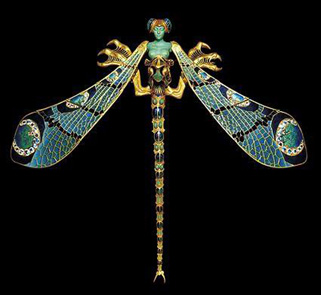 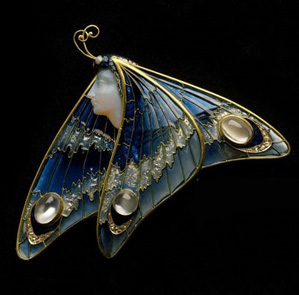 A common theme included highly decorative elements surrounding women both in jewelry and fine art during the Art Nouveau period. The jewelry pieces have a wispy look with lots of plique-a-jour enamel. Plique-a-jour is a French technique for letting in daylight so the enamel is translucent & has the look of stained glass. 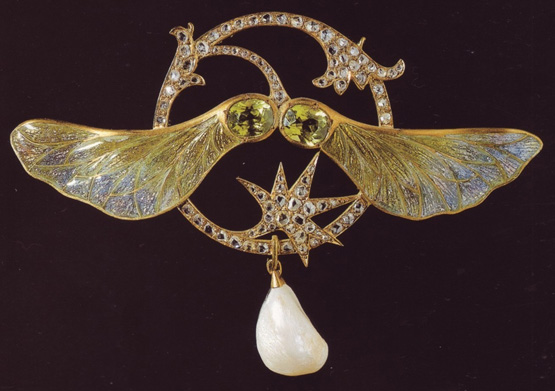 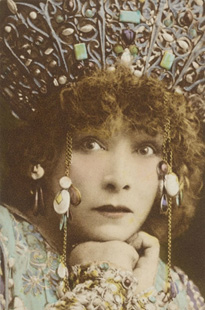 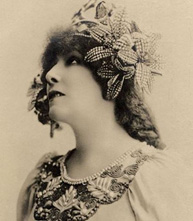 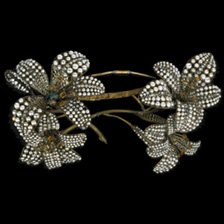 Sarah Bernhardt, pictured left, was a French actress known for wearing Art Nouveau jewelry. She popularized the look during this time especially with pieces designed by Alphonse Mucha and Rene Lalique. Sarah Bernhardt is pictured wearing the "Lilly Crown" by Rene Lalique by Mucha